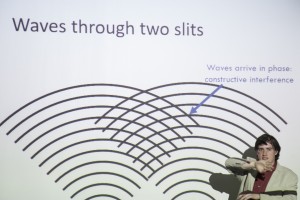 Belgrade hosted some of the most prominent quantum physicists, musicologists, composers, musicians and engineers, who were invited to the Quantum Music conference at Serbian Academy of Sciences and Arts, on March 21 and 22.

The conference was organized by the Institute of Musicology SASA and the Center for the Promotion of Science.

The participants of the conference had the opportunity to listen to lectures of, among others, Vlatko Vedral, professor at the University of Oxford, Klaus Molmer, professor at the University Aarhus, Andrew Garner, quantum physicist from the Center for Quantum Technologies in Singapore, as well as musicians Sonja Loncar and Andrija Pavlovic (LP Duo) and engineer Dragan Novkovic, one of the initiators of the project Quantum Music.